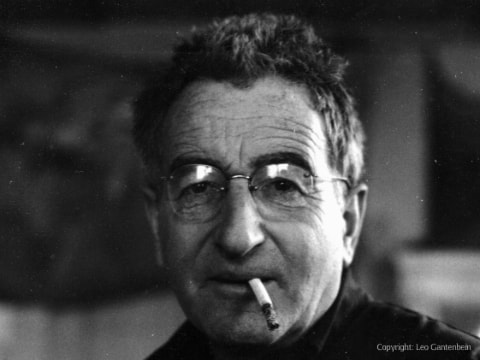 A new life in Bondo

The move from Zurich to Bregaglia gave Varlin's life and work a new direction. Even though the style of his work remained unchanged, it is still obvious that his stay in the valley manifested itself in a certain technical intensity.

Varlin enjoyed living in Bondo. In an interview he says," I like living in this village...the people of Bondo are simple people, farmers, of whom I am very fond of...But, for me it might also have to do with my age, the fresh air and being around normal people is important".

His affection for the people of Bondo can also be seen in the enormous canvas he painted in 1975, entitled "People of my Village". The work is on display at the Ciäsa Granda Museum. Varlin's grave is located in the small cemetery of Bondo.

In addition to landscapes, such as "Winter in Bondo" or "Maloja - Alpine Race", Varlin also painted numerous portraits, also of famous people, such as writers Max Frisch and Friedrich Dürrenmatt. Often, his paintings are almost caricature-like, with distorted faces and expressions that seem transfomed from their recognizeable clean-cut features and prominent contours.